Bologna, 19 March 2019 - The Board of Directors of Datalogic S.p.A. (Borsa Italiana S.p.A.: DAL), a company listed in the STAR Segment of the Italian Stock Exchange managed by Borsa Italiana S.p.A. (“Datalogic”) and global leader in the automatic data capture and process automation markets, has approved the draft statutory and consolidated financial statements as of 31 December 2018.

The Chief Executive Officer of the Datalogic Group, Valentina Volta, commented: “Once again, 2018 has seen the Group successfully confirm growth in revenues thanks to the outstanding performance of the US market, driven by the Retail and Transportation & Logistics sectors that grew double digit, as well as Manufacturing and the excellent results seen on the Chinese market, driven by Manufacturing.
The extremely positive performance by these two geographic areas was partially offset by a slowing in the EMEA area and in Italy in particular.
2018 was a record year for the Group in terms of investments in Research and Development and the strengthening of the commercial and distribution structures, with a rise of almost €20 million on 2017. We expect to see major benefits in terms of new product development and increased sales in the next few years, particularly in North America thanks to these investments. The Group has managed to maintain a level of profitability substantially in line with 2017, despite the higher investments, through the improvement of the Gross Margin and action taken to control and limit general and administrative expenses.
We are confident we can continue our growth in revenues well into 2019, maintaining our profitability despite a year start showing some uncertainty in Europe and Asia.”

Results for FY 2018 show an increase in all financial indicators, confirming the positive trend seen in recent years and once again booking the best ever performance since the year during which the Group was founded. Although benefiting from an improvement to the gross operating margin, the economic indicators reflect the greater investments made in R&D and the strengthening of the commercial organisations necessary to pursue the Group’s growth.

Consolidated net revenues were €631.0 million and, despite an unfavourable trend in exchange rates, recorded growth of 4.1% on the €606.0 million booked in 2017 (+6.4% at constant exchange rates), above all thanks to an improved mix.

The gross operating margin at €306.0 million, has grown by 6.1% on the €288.4 million booked the previous year, also showing a 0.9 percentage points increase in the incidence on revenues, going from 47.6% in 2017 to 48.5% in 2018. The improvement is mainly due to efficiencies on the purchase of materials and the control of fixed production costs.

Operating and other costs at €215.6 million, are up 7.9% on the €199.8 million booked in 2017 and increase by 1.2 percentage points in terms of incidence on turnover, going from 33.0% to 34.2%. This increase is primarily due to a rise in research and development costs (+12%) and distribution costs (+12.6%), partially offset by the reduction in administrative and general expenses.

EBITDA of €105.5 million rose by 2.2% on the 103.3 million recorded in 2017 (+1.4% at constant exchange rates), whilst the incidence on revenues (EBITDA margin) went from 17.0% in 2017 to 16.7% in 2018, primarily due to the above-described greater investments made in R&D and the strengthening of the commercial organisations, partially offset by an improvement in the gross operating margin and a limiting of administrative and general expenses.

Non-recurring costs/revenues and impairment (€2.3 million vs €0.9 million in 2017) mainly related to the reorganisation of the industrial and distribution footprint and to restructuring operations involving various company departments.

Financial income was negative by €5.7 million, as compared with a negative €7.3 million in 2017. The improvement is mainly due to the benefits of the renegotiation of the cost of loans and the reduction of bank expenses and trade exchange differences recorded on exposures in foreign currencies.

Below are details of Datalogic Division revenues, broken down by business segment:

(*) The Channel (Unallocated) segment includes revenues that cannot be directly attributed to the 4 identified segments.

Please note that 2017 data has been reclassified.

The Healthcare sector declined by 28.6% (-26.9% at constant exchange rates) on 2017, the year in which it had recorded exceptionally good results thanks to the acquisition of important orders in some of the most important American hospital chains.

Division EBITDA came to €2.9 million, basically in line with last year; the incidence on revenues is 10.4%.

The table below shows Group revenue by geographic area, as achieved in 2018 vs 2017:

On 03 April 2018, in implementation of the shareholders' meeting resolution to authorise the purchase and sale of treasury shares, passed on 04 May 2017, Datalogic S.p.A. stipulated an agreement with an intermediary of primary standing, for the buy-back of treasury shares on the market. This agreement was terminated early on 10 May. More specifically, in the period running from 03 April 2018 to 10 May 2018, the Company bought back 396,773 treasury shares out of a maximum envisaged of 500,000 shares.

On 23 May 2018, the Board of Directors of Datalogic S.p.A., in confirming the governance structure previously disclosed to the market, confirmed Valentina Volta as Chief Executive Officer of the Datalogic Group, with all executive powers, with the exception of the two areas (“M&A” and “Real Estate”), which will remain exclusively with the Chairman, Romano Volta. It is also specified that Ms Volta is assigned exclusive powers for the area of “Markets-Sales & Marketing” and that all other powers not assigned exclusively to the Chief Executive Officer (“Markets-Sales & Marketing”), or exclusively to the Chairman (“M&A” and “Real Estate”), are shared by the two positions, with separate powers.

On 09 August 2018, the notary Angelo Busani tendered his resignation from the position of Director on the Board, so as to allow for a Board make-up that would even better optimise gender diversity. At the same time, the Board of Directors co-opted Prof. Vera Negri Zamagni.

There are no significant events to report.

The global macroeconomic scenario shows some aspects of political uncertainty and some suggestions that the economic outlook may slow.

In the sector in which the Group operates, long-term development macro trends are confirmed in all the main reference industries, with a demand that Datalogic will continue to satisfy over the coming years: industrial automation and robotics development in the Manufacturing sector; investments in technology to reduce costs and improve the customer experience of Retail sector customers; increased volumes of deliveries following the growth of e-commerce and consequent rise in investments in technologies aiming to minimise error and reduce delivery terms in the Transportation & Logistics sector; and the evolution of the regulatory framework towards higher safety standards in the Healthcare sector.

North America is the geographic area in which the greatest growth is expected in 2019.

Unless significant changes occur in the current economic and sector trends, the Group expects to be able to pursue revenue and profitability growth almost in line with 2019, while maintaining a sound financial position and continuing to generate cash.

At the Shareholders Meeting scheduled for 30 April 2019, the Board of Directors will propose to distribute an ordinary unit dividend, gross of legal withholdings, of €0.50 per share, for a maximum amount of approximately €29.2 million, with coupon detachment on 27 May 2019 (record date 28 May 2019) and payment from 29 May 2019.

The notice calling the Shareholders' Meeting and the related supporting documents will be made available in accordance with the legal terms and conditions.

The Board of Directors also approved the Annual Corporate Governance and Ownership Report and the Consolidated Non-Financial Declaration pursuant to Italian Legislative Decree no. 254/2016. A copy of the reports will be available to the public in accordance with applicable law.

Note that the auditing of the draft financial statements has not yet been completed and that the independent auditors’ report will be made available within the deadlines set at law. The attached balance sheet and income statement are reclassified statements, and as such have not been subject to audit.

Finally, the Annual Financial Report (pursuant to article 154-ter of the Consolidated Finance Act) of Datalogic S.p.A. will be available to anyone who requests it at the company headquarters or at Borsa Italiana SpA, on the “eMarket STORAGE” instrument, managed by Spafid Connect S.p.A., and may also be consulted on the company’s website www.datalogic.com (Investor Relations section), in accordance with the law and applicable regulations.

Note furthermore that this press release contains forward-looking statements about the Group’s intentions, beliefs and current expectations with regard to its financial results and other aspects of the Group's operations and strategies. Readers of the present press release should not place undue reliance on such forward-looking statements, as final results may differ significantly from those contained in the above-mentioned forecasts owing to a number of factors, the majority of which are beyond the Group’s control. 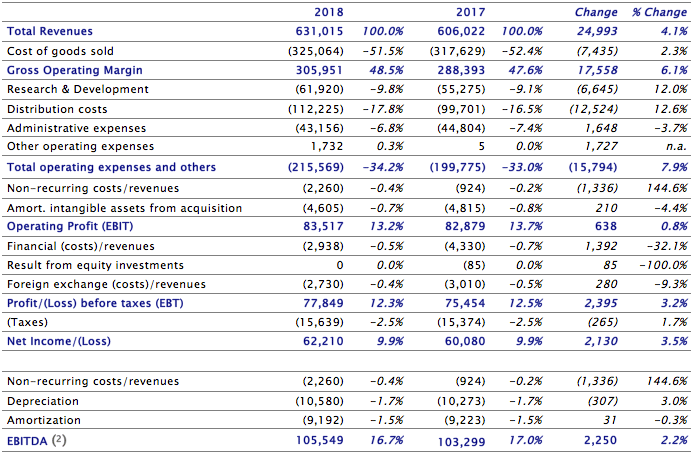 1 The reclassified Income Statement and Balance Sheet show measures used by the Management to monitor and assess the financial performances of the Group. Given that the composition of these measures is not regulated by the reference accounting standards, even if they are directly reconcilable to the IFRS statements, they are not subject to any audit procedure by the Independent Auditors.

2 EBITDA (Earnings Before Interest, Tax, Depreciation and Amortization): this indicator is defined by Datalogic as Profit/Loss for the period before depreciation/amortization of tangible and intangible assets, non-recurring costs/revenues, financial income and expense and income taxes. 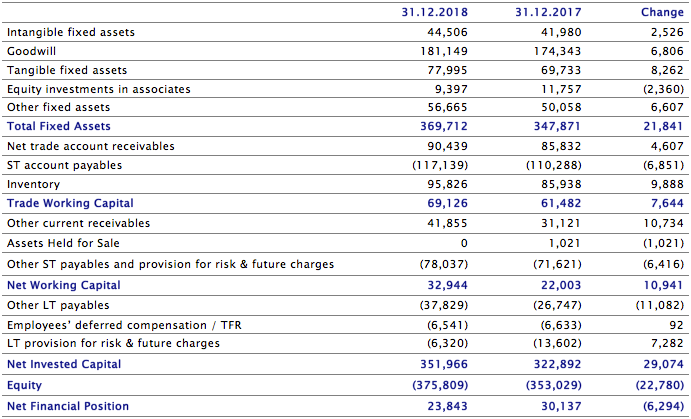 3 The reclassified Income Statement and Balance Sheet show measures used by the Management to monitor and assess the financial performances of the Group. Given that the composition of these measures is not regulated by the reference accounting standards, even if they are directly reconcilable to the IFRS statements, they are not subject to any audit procedure by the Independent Auditors. 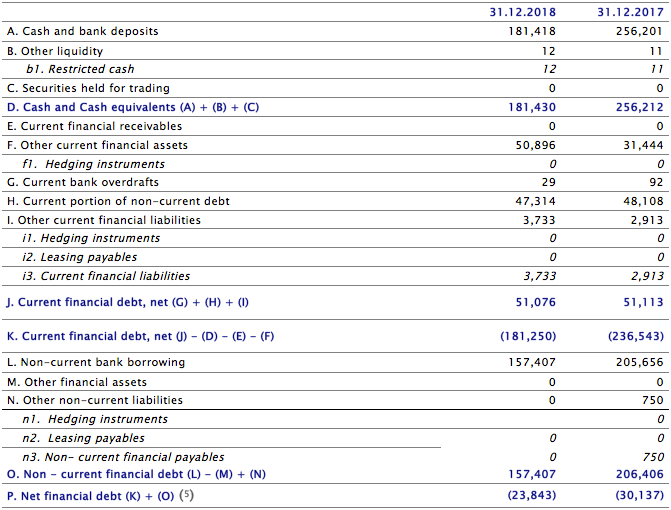 4 The reclassified Income Statement and Balance Sheet show measures used by the Management to monitor and assess the financial performances of the Group. Given that the composition of these measures is not regulated by the reference accounting standards, even if they are directly reconcilable to the IFRS statements, they are not subject to any audit procedure by the Independent Auditors.

5 Net Financial Position or Net Financial Debt: this indicator is calculated in compliance with Consob Communication no. 15519 of 28 July 2006, also including other financial assets consisting of temporary liquidity investments.